Preventative, Curable.Yet it is an Undeclared Epidemic

Skin cancer is the most prevalent of all cancers. Estimates vary on its occurrence but it is estimated that approximately 500,000 Americans develop skin cancer every year.

Prevention is the Best Defense Against Skin Cancer

The principal cause of skin cancer is almost universally accepted by medical experts to be overexposure to sunlight, especially when it results in sunburn and blistering. Other less important factors would include repeated medical and industrial X-ray exposure, scarring from disease or burns, occupational exposure to such compounds as coal and arsenic, and family history.

Prevention is a matter of guarding the skin against the known causes. Since the sun and its ultraviolet rays would seem to be the principal culprit, the most effective preventive method is to limit the exposure of the skin to harmful rays by covering up and by the use of sunscreens with at least a 15 rating.

Early Detection is the Surest Way to a Cure

It is a simple routine to inspect your body for any skin changes (see P 4 for suggested procedures). Each of the skin cancers is depicted in the following pages and can be readily detected. If any growth, mole, sore or discoloration appears suddenly or begins to change, see your dermatologist.

Fortunately, skin cancers are relatively easy to detect and most can be cured. Even malignant melanoma, if caught in its early stages, can be treated successfully.

There are three main forms of the disease. 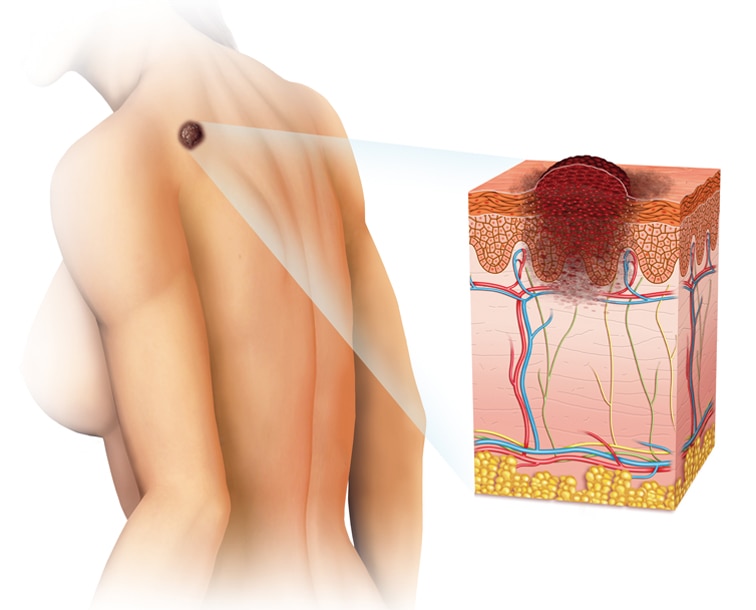 This tumor of the skin usually appears as a small, fleshy bump or nodule on the head, neck hands

these nodules may appear on the trunk of the body, usually as flat growths. Basal cell carcinomas seldom occur in dark-skinned persons; they are the most common skin cancers found in Caucasians. It been found that people who have this cancer frequently have light hair, eyes complexions, and they don’t tan easily.

These tumors don’t spread quickly. It may take many months or years for one to reach a diameter of inch. Untreated, will begin to bleed, crust over, then repeat the cycle.

Although this type of cancer does not metastasize (spread to other parts of the body), it can extend below the skin to the bone and cause considerable local damage.

These tumors may appear as nodules or as red, scaly patches. Squamous cell carcinoma is the second most common skin cancer found in Caucasians. It typically is found on the rim of the ear, the face, the lips mouth. It is rarely found on dark-skinned persons. This cancer will increase in size, developing in time into large masses. Unlike Basal cell carcinoma, it can metastasize.

The cure rate for both basal cell and squamous cell carcinoma is 95 when properly treated.

This most virulent of all skin cancers will develop on the skin of an estimated 25,800 Americans in 1987. An estimated 5,800 will die. But melanoma, like its more benign basal cell and squamous cell carcinomas, is almost always curable in its early stages.

Melanoma has its beginnings in melanocytes, the skin cells which produce the dark protective pigment called melanin. It is melanin which is responsible for suntanned skin acting as protection against the sun. Melanoma cells usually continue to produce melanin, which accounts for the cancers appearing in mixed shades of tan, brown and black. Melanoma has a strong tendency to metastasize and once colonies of melanoma cells reach vital internal organs, the disease becomes much more difficult to treat.

Melanoma may suddenly appear without warning but it may also begin in or near a mole or other dark spot in the skin. For that it is important that we know the location and appearance of the moles on our bodies so any change will be noticed.

Excessive exposure to the sun, as with the other skin cancers, is accepted as a cause of melanoma, especially among light-skinned people. Heredity may play a part, and also atypical moles, which may run in families, can serve as markers, identifying the person as being at higher risk for developing melanoma there or elsewhere in the skin.

Dark brown or black skin is not a guarantee against melanoma. Black people can develop this cancer, especially on the palm of the hands, soles of the feet, under nails, or in the mouth.

The ABCDs of Melanoma:

Some additional warning signs of melanoma would include changes in the surface of a mole: scaliness, oozing, bleeding or the appearance of a bump or nodule; spread of pigment from the border into surrounding skin; and change in sensation including itchiness, tenderness, or pain.

How Skin Cancer is Treated

If a laboratory test reveals that an area of the skin is cancerous, the dermatologist has an array of procedures to choose from, dependent on the needs of the individual patient. In the treatment of any of the skin cancers, including melanoma, early detection and removal is the best defense. Dermatologists recommend that the best way to guard against melanoma/skin cancer is to do a monthly self examination. Get familiar with your skin and your w!n pattern of moles, freckles and “beauty marks”. Be alert to changes in the number, size, and shape and color of pigmented areas. If any changes are noticed call your dermatologist.

Prevention of Melanoma/skin cancers is obviously the most desirable weapon against this disease. But if a lesion should develop, it is almost always totally curable if caught in the early stages. To ensure that any developing lesion is caught in the early stage, a regular program of monthly self-examinations should be followed. The following is a suggested method of self-examination that will ensure that no area of the body is neglected in a regular program of self-examination.
To perform your examination you will need a full-length mirror, a hand mirror and a brightly lit room where you can study your skin in privacy. This step-by-step method, if done monthly, will provide you with an “early warning system” against melanoma/skin cancer:

About our Dermatology Clinic